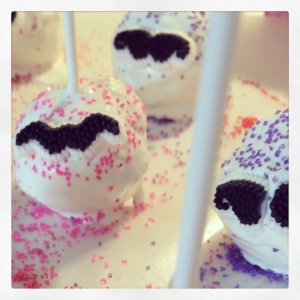 Up Close with CakePops

Cake pops have been on my radar for over a year. They just got some recent hype on February 1st during National Cake Pop Day, which proves they’re part of pop culture and here to stay. So what better sweet treat occasion than Valentine’s Day to test them out? In hindsight, I researched too much, got lost in Pinterest boards and overcomplicated it. The simple cake pop is a beautiful thing.

It’s really the perfect bite – actually three bites in one cake pop to be exact. In my opinion, it’s a better (less caloric) option than a sliver of cake or a cupcake with frosting whipped up into an insane tower that makes a dainty bite messy and nearly impossible. However, the cake pop is three times more labor intensive than your standard box cake mix spread with store-bought frosting.

Is it worth it? When I was up til 1:00a.m. making four dozen cake rounds in my NordicWare Cake Pop Baking Pan, I did not believe so. Each box cake mix for one 9×12 pan makes 48 cake pops. If I cake pop again, I might get another pan so turnover time is quicker. I had to wait 10 minutes in between 20 minute baking cycles to let them cool properly. The pan needed to be cleaned each time too.

You can also make the variety that doesn’t require the pan mold. You do this by making a standard 9×12 cake then mixing the finished cake with frosting and forming that into balls, much like a cookie, then dunking in frosting. I did make a yellow cake to test this version out, but the family ate it before I could come back to it two days later.

The cake pops we made were from a strawberry cake mix, for Valentine’s Day of course! Out of the 48 I made, only 25 actually made it to mustached cake pop art (when the yellow cake was gone, they started popping the unfrosted cake rounds). And because I waited four days, I also missed Valentine’s Day treat bags. It’s just how it goes sometimes. No mother guilt here.

I think I was hesitant to tackle the frosting because of burnout due to futzing with cake pop round baking. I also had to make another run to the store because the kids ate the white chocolate melting drops I bought last week (not helpful!!). So with a second round of Guittard Melt’n Mold White Chocolates melting in the pan, I called the kids to the kitchen for detailing duty. My son stuck the cake rounds in the center with the cake pop sticks, I dipped (and double dipped) them in white chocolate, drizzling the top and edges as needed, and my daughter sprinkled (Target brand white, purple pink and red four pack of Valentine’s Day Sugars), mustached (Wilton brand decorations) and resprinkled them.

The decorating was quite easy and much more fun than the baking portion. Although some of the cake crumbled off into the frosting by the last five pops, the others looked smoothly frosted. One tip I read somewhere was to make sure frosting covered the base where the stick and round connect – very helpful as it kept them from falling off. By assessing the rounds pre frosting, I thought they’d turn out smaller than your average Starbucks cake pop, however, they were comparable if not a little larger.

For a first attempt, we were satisfied. Note: I am not a baker or decorator (although I did work at a bakery for three summers while in college) so this is meant to be inspiration for the average non-baker to take on the cake pop. In the decor category, we could’ve added some eyes to the cake pop face, I guess. Ava, my 10 year-old, styled the shoot for the final cake pop photography and opted to stick them in an apple so they’d stand up in display mode. And our random pencil jar covered in mustache duct tape came in handy too. Clever!

For future, I’m taking decorating cues from Pinterest boards (see fishbowls, Valentines, rainbows, Frozen) and pinning them to my own Sweet Eats Pinterest Board, my sister-in-law’s cake pop book and a newly discovered cake pop and cupcake artist – Heather of Playful Cupcakeations. Ava and I liked the flavor combo, Calvin, my 8 year-old, commented that it wasn’t his favorite combo. I’m thinking chocolate cake pop with salted caramel frosting next time round.  Other yummy suggestions?

After making Chewy Chocolate Chunk Cherry Cookies for Valentine’s day, it was time to put some thought into the Valentine card. There are some really appealing store-bought options out there that the kids would love, however, we opted to go the homemade card route.

I might have been happy with a simple heart-shaped valentine and some variation of roses are red. Then I thought about wrapping treats in comic strips or stuffing the strips into the cellophane bag with treats just for laughs. It caused me to wonder about the modern-day comic. I have never been one to religiously follow any particular comic strip. I do remember reading Garfield a bit as well as some Peanuts. I started delving into the world of comics online. It’s alive and well let me tell you. Calvin and Hobbes on gocomics.com has forty comments on today’s comic strip about sledding.

It so happens that my soon to be six-year-old son’s name is Calvin. To answer what some of you are wanting to ask, No, we did not name him after Calvin Coolidge, Klein or Hobbes’ pal. We just liked the name. And I’m into this strip – I can relate even though somehow the author, who has no children, can write this stuff and be so right on. Strip author Bill Watterson describes his Calvin as “one of the most difficult six-year-old boys there is. Judging by his imagination, I think he’s destined to be something great.”

We wonder, if we made our own comic strip, what would it be like, what would we talk about? If there’s one re-occurring theme with my Calvin, it’s that he’s absolutely starving all of the time. And when he’s not starving, he’s dying of thirst. Obsessed with food. Ideally for him, he would live in Middle Earth and have ‘ses on every hour if he could…. nineses, ten’ses, elevenes…..

As it turns out the incident from the other night melds into our first script nicely. Scene 1: “Yeah, Yeah, I want to go to Ava’s basketball practice. Take me! Take me!” Scene 2: Alright (says Dad), Get bundled up. We’re leaving now.” Scene 3: (Mom to Dad): “You are NOT buying him treats from the vending machine.” Scene 4: (Mom to Calvin): “…so now you’re not even going?”

iPod Tunes: All You Need Is Love

My Calvin gets a kick out of reading this continually. That really did happen, he says. We set up a mass production line for 19 cards for classmates and he colors them in, laughing and intense concentration alternating.  Ava’s got hers going too – a spoof off of the comic Jane’s World, a strip for all of those girls out there just trying to figure life out. This strip would be recreated in our eyes as Jaine’s World (as in Ava Jaine). Ava Jaine is a kind soul. Born a gemini, she is a teacher and explorer by nature, patiently finding her way in the world. We started a strip about her hair, then it got WAY to sensitive to complete. For a later activity, perhaps.

In addition to the strips, we found 39 fab ideas on familyfun.go.com including this rocket (5) and iPod (31). Those will go to the classmates along with the comic strips. I’m working on variations with less candy – the rocket with only Hersey kisses, no lifesavers and the iPod with only Reeses, not the sweathearts too. What fun am I? We will just have to see how things go over for the kids on February 14th. 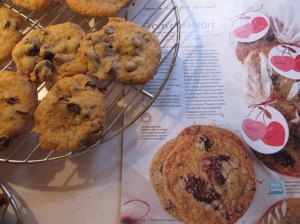 I was first introduced to cherry flavoring via Hubba Bubba Bubble Gum. You could say I had a cherry crush (not like Orange Crush the soda, just a love of cherry). I couldn’t make a 5-pack of Wild Cherry last more than a day. Then there was a long intermission. In my late twenties, out of boredom from other Ben & Jerry flavors and an attempt to make a healthier selection, I made my first pintly purchase of Cherry Garcia ice cream (bing cherries and dark chocolate). Years later Cherry Coke followed suit.  And now, in another winning cherry and chocolate combination, my kids and I uncovered Chewy Chocolate Chunk Cherry Cookies courtesy of Martha’s February issue, just in time for Valentine’s Day.

It’s a really simple recipe really. The sweetness of the cherries balances out the chocolate and the cherries keep the cookies moist. It’s a different twist on your traditional chocolate chip cookie to show those on your Valentine list you put a little thought and effort into the treat. I brought in my son to help  measure and mix  – including the fold-in technique (very important so as not to crush the cherries and chocolate) and my daughter to roll the dough and place on the baking sheet.

They both had the job of attentively watching them bake in real-time and tasting at our tea party. Present at the party was Ava in her sundress and wide-brimmed hat, Calvin with a smirk that said tea parties are not my thing and a t-shirt that would have read “I’m only here for the cookies,” and me in my Alice in Wonderland costume from three Halloweens ago. I mention this because I can’t say that I have ever worked in the kitchen in heels or a costume. It did get an eyebrow raise from my husband.

At half-past four, it was time to end the party and Part 1 of Valentine’s Day prep. We all agreed that the combo in the cookies was a good one and that cherry, indeed, is a flavor to savor. Now, would we want to share?

Part 2 will include the valentine care and card packages we’re scheming up. Family and adults will get the full-on cookie package and kids, through their valentine exchanges at their schools, will give non or low-in-sweet-treats valentines (if I can at all have a say it in) with homemade cards (if I can hold over over the super convenient store bought options).