Of course you should go when the circus come to town! More specifically, make sure it’s the Cirque du Soleil (French)/ Circus of the Sun (English) — not just any circus. And in case you hadn’t heard, OVO (“egg” in Portuguese) is the latest Cirque du Soleil to come to town (the Twin Cities). I was not going to miss it despite all odds. 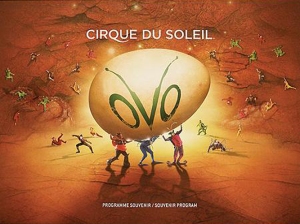 I worked through some major scheduling feats to pull off the first attempt to attend Ovo on May 25. I ran the kids here and there, got all dolled up for the VIP treatment and headed over with a friend who had scored the tickets. When we arrived at the mysterious location referred to on the ticket as the Mall of America (MOA) North Lot, it was empty which seemed strange for 7:45, just 15 minutes before show time. Upon more investigation, we learned opening night had been changed months ago to Thursday, May 26. There would be no cirque tonight and I was not up for more schedule switch-ups to make it back the next night.

Perplexed, I checked the email forward later that night. I emailed the MOA PR person who they originally came from, questioning. She was apologetic. The tickets themselves (accessed real-time from an email link) said the 26th, however the email from mid-April said Wednesday the 25th. She sent me a link to purchase tickets at 40% off (which any Joe public can access here). I did not yet have a birthday present set for my soon to be 8-yr-old daughter, Ava, so I got us our tickets for Tuesday, June 7th, what I thought was her last day of school. 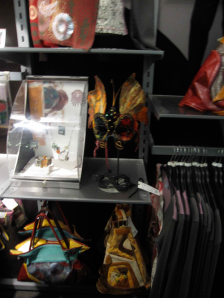 On Monday, I learned that Wednesday June 8th was her last day of school. This meant she would be up late on a school night, making it hard to rise and shine by 6:30 the morning after the show. I was still optimistic. We arrived home post school and work on Tuesday evening and got our summer dress on and topped it off with eye-make-up and lip gloss. We parked at the MOA North Lot and took a shortcut through Nickelodeon central to our OVO Eat + Experience restaurant of choice: Tucci Benucch (one of nine of a list of restaurants offering special deals with OVO tickets, which I was cued into by the same helpful MOA PR person).

With 6:45p.m. reservations made in advance on Open Table, we bypassed the line. I had already looked at the menu to narrow things down prior to coming, knowing timing would be a little tight. I ordered our drinks, appetizer (free with entree purchase) and entree all at once. I asked him to bring the tab so we could more easily be on our way post meal. I went to fish out my credit card in my bright yellow slim snap purse I had just transferred over to and could not find the card. No ID either for that matter. I quickly scanned my will-call ticket print out. It said nothing about requiring ID, but I was pretty positive I’d need it. It also said to arrive 45 minutes to an hour in advance for will call. It was 7:10 and the show was to start at 8:00p.m. Panic! Ava assured me everything would be okay. 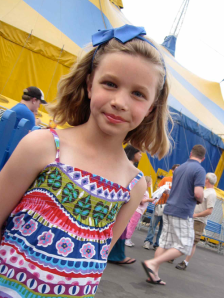 I explained the situation to the waiter and had a brief chat with Jack, the manager. They were understanding and gracious about the whole ordeal and I’ll just say we worked something out. We shared a few bites of the split Summer Vegetable Risotto and Toasted Ravioli and boxed up the rest. We arrived at cirque by 7:35 to no lines and signage clearly indicating ID required. Luckily they were super accommodating as well. We had seats in the third to last row ($27 each through the promo deal), which I had purchased after hearing from others who had attended that with the thrust stage and smaller-scale arena there was not a bad seat in the house.

It was 7:40. We perused the cirque items for sale and concessions and used our last cash for beverages. That particular area of the tent was not air-conditioned and given it was the hottest day in MN in 23 years, we weren’t going to stick around there for long. We went to entrance #6 and were directed by flashlight to our seats. The big tent was air-conditioned and the whirring fans were quite loud. No complaining here.

Cirque describes the performance as “OVO is a headlong rush into a colorful ecosystem teeming with life, where insects work, eat, crawl, flutter, play, fight and look for love in a non-stop riot of energy and movement.” So at 8:00 we begin. There is a lone dragonfly with multiple one-armed balancing poses from quite a height, fleas working pyramids, red ants juggling kiwi and ears of corns, a firefly flinging spools (juggling) , butterflies spiraling, spiders with extreme flexibility and scarabs in the aerial act. This is all before intermission in the nearly 3-hour-long show.

The ladybug, a wingless housefly and a beetle buzz about the mysteriousness of the egg and flit in and out between the shows performance transitions. You will never hear any of the insects utter a distinguishable word other than “Ovo!” There is the constant of buzzing among the insects and cricket chirping. And then we begin the second half where the tour-de-force performance is the black spider (a tarantula, perhaps? who loses his coat of entangled black legs with bright red lights) who does an amazing act on a wire that moves back and forth while swinging side to side. Then he just adds a unicycle braced across his collarbone while inverted. To Ava I sounded like a broken record: Seriously? Amazing! 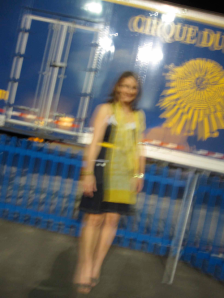 My only other cirque point of reference is “O” Cirque du Soleil in Vegas – the stage with water and diving acts. Other cirque connoisseurs I’ve talked with rated Ovo tops. I could envision Ovo being one of the best for kids because the insects draw them in. Apparently the costume designer chose to focus on mimicking the emotions insects evoke rather than recreating insect anatomy on the human body. Well-evoked, I thought as Ava shivered a bit at the thought of being that cricket, trapped and left to die in the spider’s web.

By the time we move on to the final act of the crickets, you want to leap out of your seat. There’s maybe 16 of them. They’re scaling the 8M wall (with climbing wall footings) and leap-running up the walls after a bounce into the trampoline below them. The trampoline runway also extends the length of the stage for the crickets to perform their series of no-handed back handsprings and full twists.

We were entranced until the very end. Did I mention the Brazilian samba music with 16 soundtracks? And the plants that open and emit flowery scents? The culmination of the costumes, acts and music proved to be a captivating show. By the 10:45 end, everyone sprung to their feet for several rounds of applause. (Spoiler Alert): And you barely notice that the large egg you’ve anticipated will open by the finale of the show, doesn’t. The audience doesn’t seem to mind either. They gave it a standing ovation.