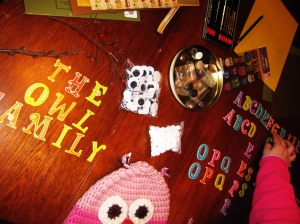 People’s opinions on owls range from spooky to cute. I might be dating myself if I mention the first owl I ever realized was Woodsy the Owl via a rather large jigsaw puzzle. Since then, owls have appeared in children’s stories from the Berenstain Bears’ Bears in the Night to grown-up pop culture reads like Downtown Owl. I happen to know the Target design team has been obsessing about them too – a good nuetral baby shower theme, no doubt. And then there’s my daughter’s owl robot. In summation, the wide-eyed and fully feathered owl has been on my mind. So much so that when I saw a crafty create-your-own kit at Paper Source, I didn’t buy it. Instead, I bought the paper and mulled over the project and my ambition for a few months.

My 8-yr-old daughter, Ava, co-obsessed with me about owls. Finally, on a recent chilly Sunday, we were ready for the owls. We brought out a few items for inspiration including buttons, ribbons and the items from our Target run the day prior including a package of googly-eyes and owl stickers. Our kit of parts included paper, eyes (in four sizes), stickers and scraps from our bin of leftover crafts (felt with backing, misc patterned paper).

We had already selected a green, yellow and brown theme. We spent some time perusing the craft web sites and found some owl wall art that helped us with our project vision. We pulled materials and reused core board, cut into four pieces of differing sizes. Now we knew we wanted to tell a story about a family of owls – – uhhh…. that would be us, actually. And here’s our story:

Scene 1: The owl family waives good bye to the Daddy Owl who went on a trip. We upgraded his luggage for the flight on (F)Owl Air.

Scene 2: The owl family chats with Daddy while he’s out of town. They are sad. They miss him and want him to come home soon (please bring back our new community iTouch as well).

Scene 3: The Daddy Owl takes an early flight back to his home tree, much to his boss’ dismay.

Scene 4: He’s reunited with the whole googly family. The End.

Owl Over the Shoulder

A fairly simple story, but I made Ava describe the important elements of the story to share. She was adamant about its content and length. This expanded what could have been a two-board story to four, thus doubling the hours (there are 11 owls, 2 eyes a piece and 3 felt/paper layers per eye). After four hours of patterning (based on stickers and finding right-sized circles to trace), cutting and gluing the owls, the last elements – decidedly organic or found – would be gathered on a walk. We came back with small twigs and branches and I was extremely happy to put the hot glue gun to use for the second time ever.

We organized the owls and twigs on our boards and let it be until the next day. We haven’t figured out framing – possibly with ribbon or wood – but for now, the Owl Family is prominently on display in our living room in clashing yellow-gold.  You can bet I’ll always be looking over my shoulder while reading in that room, wondering who is watching me.