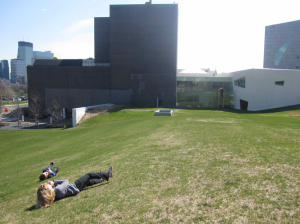 Even on the first sunny 71 degree Saturday in 7 months we did not want to miss the Walker Art Center’s first Saturday of the month, complete with free admission and family-oriented programming. The assumption may be that museums are an inside thing. The great thing about the Walker, as we rediscovered today, was that it offers both indoor and outdoor inspiration. Chris Larson’s piece in particular literally straddles the interior and exterior. Then there’s the sculpture garden and Open Field (their FB says 31 days left til its open).

Typically we park underground to stay out of the elements, but today we parked on the hill above Open Field. The temptation was too great to resist rolling down the hill, plus they had it all to themselves. After rolling down, there’s running up and repeat, then just running down screaming at the top of your lungs. We head indoors and check out the Happy Duckling film, a sweet short film in pop-up book style about a mother and son (co-operators of the Happy Duckling Restaurant) and a persistent duck whose persistence doesn’t pay off. By the way kids are always crawling over the “seats” of random height and width in this film area, you’d think it was a jungle gym.

On to more activity. The busiest area on a Saturday is usually the Star Tribune Foundation Art Lab, so we head there first at 10:30. We select a mix of small wood pieces and are to use the artist’s structure (installation) as inspiration for our structures.  It had been three months since we actually walked through the structure in the Cargill Lounge so we tried to recollect. Before going crazy with the cordless hot glue guns, I encouraged them to look at the picture of the structure and come up with their own vision. My 5-yr-old opted for a dual chicken coop and horse stable, while my 7-yr-old opted for a Menard’s store (influences from her Papa) with the paparazzi taking photos outside of it (influences from?). 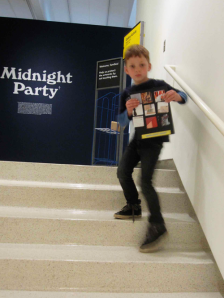 Chris Larson, the artist, is actually there. He checks in with all of the junior builders and offers advice and asks a few questions. We spend about 30 minutes assembling the structure and move them to the shelf to set.

Then we head to the lobby desk where there are three different WAC packs for kids – we select the “Explorer” and set out to find 9 works of art in galleries 1-3. It’s a matching task – a 2×2″ magnet zoomed-in on artwork that needs to be matched with the artwork itself. I thought this would be a difficult task, but they found seven somewhat easily and we retraced our steps a bit to find the last two.

We cruised through Larson’s installation again (see the video), the kids noting the illusion of continuity from inside to out and the staircase that led nowhere (see here from a previous outing). Then we wandered through the Walker Art Shop, the Spectacular of Vernacular (ends May 8), and grabbed a snack at the Garden Cafe before swinging by to pick up our structures. We considered the 7th Floor Jewelry Mart that was special in the line-up today, but kids were too hungry to delay snack-time. We enjoyed sitting outside for snacks and the kids got in a few more trips down the hill before rolling out around 12:30 or so.

I was reminded by a few staffers that they’ll be taking activities outside for the summer.  If you haven’t taken your kids, it’s a great family-friendly outing. Next one: June 4. Who knows, maybe even parents will be inspired enough to take a Spring roll down the hill.

One can imagine how difficult it might be to leave poolside while on winter getaway to Arizona from Minnesota in March. One day of our too-short stay, I rounded up my mom and daughter for a trip to the Musical Instrument Museum in Phoenix (MIM), newly opened in April 2010. It took a bit of convincing, but seeing my fair-skinned daughter becoming increasingly red despite sunscreen, a little break was needed.

And while you really can’t do the museum justice in 1.5 hours, that’s what we allowed ourselves for our visit. It was an easy drive from our place. As you approach the museum, it’s serenely set into the landscape and seems of the desert in its sandy, earth tones with metallic lettering. On a Tuesday afternoon, there were no lines and plenty of helpful suggestions on how to make the most of our 1.5 hours. Love love that headsets aren’t an additional fee. They come with the price of admission and in the case of this museum’s design, absolutely necessary for the full experience.

We started with a quick spin through the Orientation Gallery (what we called Guitar Gallery) and the museum coolness factor went way up for my 7-year-old. Ava found the Debutante Star guitar to her liking.  She marveled at the giant floating instruments hanging from the ceiling as we escalated up to the Geographic Galleries, a presentation of musical instruments by regions of the world including audio and video of the instruments being played in their cultural context. We spent the majority of our time in the U.S and Europe. Alaskan Tribal Chants, Hip hop, Rock n Roll and Jazz resonated with Ava. Each with our own headsets we moved about and the music for the closest exhibit would begin to play. Cool and effortless.

Listening to audio, viewing the videos and seeing the instruments on display – each section with an overview of its musical significance – touched on all the senses and made for a heightened museum experience. One that my daughter could appreciate as she seemingly got lost in her own world, dancing or humming as the music or video evoked. As I looked around, I noted the absence of children in the museum.  I suppose it was a Tuesday afternoon, a school day for most kids. 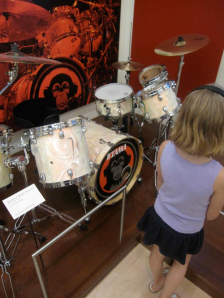 We moved through Latin America, four Asian rooms and the Middle East prior to heading back down to the main level.  With about a half-hour left, we headed to the Artist Gallery, featuring instruments, video concert footage and more linked to world-renowned musicians and music-innovators.  John Lennon’s piano was there with “Imagine” looping. There were also more current artists featured including Keith Harris’ drum set from tour (Harris is the Black Eyed Peas’ drummer). The inclusion of these type of artists made the museum feel happening in a way – acknowledging that even something in recent history that is of the moment can have a place in a museum.

With our last 10 minutes, we plucked, twanged and gonged our way through Experience Gallery, where people were allowed to touch and play instruments. Most of these instruments, I suppose for non-germiness, were played by hand. The harp, the xylophone, bells and the massive resounding gong (only one strike per person, please) all got a sound check from Ava. I imagined the sound level with several kids in this room on any given Saturday – potentially deafening.

We breezed through the museum store and found a couple of small souvenirs. Ava discovered the White Falconer guitar (magnet version) and picked out a small Indian drum for her brother. And on that very high note, our MIM experience came to an end.

Today’s Rock the Cradle event at the Minneapolis Institute of Arts (MIA) / Children’s Theater seemed and huge success despite the small blizzard pending. Since the snow started at 9:30a.m., many savvy event-going parents planned to get to this event early today to beat the crowds and the snow. We almost opted out entirely, but my 7-yr-old daughter and I decided to go, based on previous experience. The rest of the family voted to stay home and play cards.

We arrived at noon and there was nowhere to park – the surfaces lots, three parking ramps and streets were full. (Note: my earlier blog about ease of parking, getting in and out, apparently only applies to the monthly family programming, not this annual event.) We waited at least 10 minutes for an on-street parked vehicle’s owner to brush her car down and leave so we could grab her spot. Worth the wait.

We were greeted in the lobby by a Current staffer who handed us a program and coupon book. There were arrow signs on the windows and around both buildings directing people. There was plenty to do between some specific things with start and end times and other things going all day long that you could just happen upon. By 12:10 the tickets for the free hourly puppet shows were all but sold out – there were a few remaining for the 3:30 performance.

Moving from the Children’s Theater to MIA, we took our seats to hear Chris Monroe, the cartoonist and author, as she sat in a big overstuffed chair on the MIA Pillsbury Stage and read three of her books while the pages displayed behind her. Ava, my 7-yr-old, was annoyed with all the babies crying and kids talking. Monroe read over the din and chattering (which died down by book two) and even seemed to find it and rediscovering her own stories amusing. Ava liked the Sneaky Sheep best and I enjoyed the Monkey with a Tool Belt and The Noisy Problem story including monkey’s elaborate tree house with an elephant stuck in his laundry chute.

Still in the MIA, we popped into the Musical Petting Zoo. Too loud, crowded and possibly past piquing her interest since she’s technically at age 7.75 and the event touts its programming as appropriate for ages 2-8.  We did wander around the MIA to find art carts complete with passports to stamp upon your visit to each one. Now this intrigued her. She recapped what she learned about the mummy in the Africa area through the Art Adventures program and stamped “Grace” in Chinese at the China art cart to take with her to see if she could replicate at home.

Then back over to the theater side. We just missed Koo Koo Kanga Roo and only joined the Kid’s Disco area briefly with Dave Campbell. This area feels like a winter picnic. Parents literally plop down anywhere on the floor with all their gear and people just maneuver around. Ava got some good snacks courtesy of Mississippi Market and a tattoo from Pizza Luce. We do some browsing in the central theater area where books, cds, t-shirts and merchandise is for sale. We got some cool Current buttons. I don’t recall there being a coupon book last year, but this year’s seems a good value with partners like Blooma Yoga, Crave, MN Children’s Museum and Creative Kidstuff with deals in the mix.

What next? A quick look outside to see it’s still snowing. We decided to head it out as planned at 1:30. True to form, another 1.5hour outing.  Because I may only have one more year left for kids to fit in the event’s target demographics, I’m glad we made the effort to attend what’s currently one of the best winter arts and music outings for parents and kids in the Twin Cities.