“Christmas gift parent advisory: do not buy the Elf on the Shelf. It is advertised to change places in your house while you are sleeping but it doesn’t. We returned our first box and haven’t had any better luck with the second. So far the elf has just been sitting in the box. The kids have been so disappointed. Just giving everyone a heads up on this.” – -Facebook post by my husband, December 24. 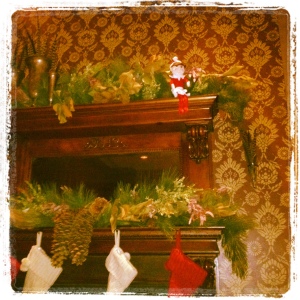 Okay, so we know that as parents we actually have to move the elf ourselves. Most chimed in with comments on his Facebook page that conveyed that they (wink, wink : )) understood that we knew what our role was. However, we did have one person suggest that I call her because “…my brother and wife have had one for a few years and what they do is hilarious I plan to get one on sale for next year. It’s not what the elf does – it’s what you do with the elf.” Now that response, Michelle, is hilarious.

The Elf is mainstream holiday culture. We got ours last year. In a culture where easy and consistent access to technology is available to our kids, the Elf for parents represents a third-party way to impose a looming threat over their Christmas gifts. Gifts that by the way, are totally technology related. We put restrictions on technology and tv time. We said that if they limited their screen time the Elf would give Santa the green light to deliver presents on their wish list, which included a Wii.

Parents are willing to pay $29.95 for this small Elf in a big box with a story. At least I feel better when I look at the mother/daughter team that chose to capitalize on this tradition. We take him out the day after Thanksgiving (Black Friday) and he works for a month. That’s about a dollar a day. Worth it, I’d say.

Our Elf is pretty boring. Others, as witnessed by Facebook posts and photos, have elves that are much more mischievous. Some fly paper airplanes, some get entangled in toilet paper, others make a mess in the kitchen or slide down the banister (see Pinterest for ideas).

I’m making a promise to get more mischievous next year – that is, if my future 8 and 10-year-old will even pay attention. I, in intro-Elf mode, have to say the guilt of forgetting to move him nightly mirrored the times when I’ve forgotten to leave money from the Tooth Fairy. I have made up a ton of excuses as to why the Elf might have chosen not to move from his post from the previous day. That was as creative as it got. Next year, I’ll be armed with new ideas! Any Elf on the Shelf stories to share? Michelle?

I for one am thankful for the opportunity Thanksgiving affords to do nothing. We have always traveled for the holiday, so I’ve never made a turkey. At the most, I’ve mashed potatoes. I’m thinking that this year, I’ve taken it too far. For future I need to learn the balance of holiday lack of activity and productivity.

Per the usual for me, all of the obligations of daily life make going from the fast-paced extreme to down time a challenge. If not properly done, it’s easy to loose respect for yourself. This Thanksgiving was no exception.

As we headed from Minnesota into Wisconsin to my mother-in-law’s house, earlier than planned due to the impending snowstorm, I felt lucky that Over the River and Through the Woods to Grandmother’s House We Go nearly applied to us minus the horse and the sleigh. We had super planning efforts prior to leaving – we cleaned the house, made a dessert to bring, bought presents for our cousin’s birthday and even picked up our poinsettias to deliver as gifts. Martha would have been proud.

The anticipation of relaxing by the fire and doing absolutely nothing was too much to overcome. By the time we arrived in Wisconsin, I was sufficiently wound down and the kids were overly wound up. Calvin was not feeling well, even though the doctor had just checked him out and diagnosed him with a cold. That weighed on me our time away, assuming the worst was yet to come due to his history of ear infections and pneumonia. I was in a relaxed state, yet edgy about what to do for him. Too much time to ponder and fear the worst. The blizzard and pharmacy close time of 5:00p.m. Wednesday spurred us into action. I called a friend who is also a PA and asked her to quickly call in a prescription to have on hand if he got worse. With antibiotics as the back-up plan, we enjoyed a fire and leisurely dinner later that evening, where I did nothing to help. What would the night be like?

Sleepless. Coughing. We decided to give him the medication around 8:30a.m. Thursday, then Calvin and I both went to sleep again, while Grandma single-handedly prepared the TG feast. I woke up groggy at 11:30a.m. – how did I let that happen? Contributions to date: zero. Calvin seemed much better after his long nap and we were all able to enjoy what Calvin insisted on calling Thanksgiving Lunch (after all it was 12:30p.m.) What would happen to dinner if we called 12:30’s meal lunch? Grandma said it was too big of a hoopla to call it TG Lunch.

As if I had not slacked off enough, I needed yet another nap after the meal. In hindsight, a little yoga or exercise of any sort might have been a better route. When I finally did rise, I turned to a Wild Cherry Pepsi. It sparked a slight start in my energy level. The kids ran circles around me. It was time for games. They learned some new dice games with poker chips that helped with math, left v right and perhaps fueled a new interest in gambling.

It was now time to eat again. New-York Style Marbled Cheesecake. We made this, so I had the honor of cutting and serving it. My contribution for the holiday.  Then more sitting and visiting. The open floor plan at Grandmas where every activity takes place in the greatroom of sorts, meant that I seldom had to move or move very far at that. I could also conveniently call out to the kids — rarely would have to go actually find them to check on them or talk to them.

The lack of activity continued throughout the evening. If I wasn’t going to physically challenge myself to anything, maybe a mental challenge was the answer. The grown-ups played Password to challenge our inner thesauruses. With only one word as a clue, the guesser would have to try to guess the word. Unless two players are on the same wavelength, it takes 3-6 clues together to guess. This at least gave my life some purpose. Even then, it was all I could do to get up off the chair and make it to bed. Surprisingly, I was quick to fall asleep. Coughing from Calvin still ensued, but I was convinced he was on the mend.

The morning came. After aebleskivers for breakfast (tasty little spherical pancakes/ a Danish thing), we were on our way home. I am now off to exercise in hopes of gaining back some self-respect and ponder what I might do differently next time. I’m thinking I may just have to host Thanksgiving at my house to bring me out of my non-contributor state.