Chef Incredible, Adding Some Muscle in the Kitchen

I had the pleasure of cooking with Chef Incredible for Easter treat-making this year. Together we made some incredible inedible eggs. As it turns out this recipe, while wildly whimsical and scientific, is not one we’d recommend.  If you insist, have at it though. Just swap out the (decorative colored) sand with just about anything else.

This Martha Stewart recipe for Marshmallow Easter Critters is unforgiving if your m.o. in the kitchen is relaxation and checking back in with the recipe after each step. We learned how critical timing was the first go around with what MS termed Marshmallow Magic. The gelatin sat about a minute too long and the syrup portion went only 3-4 degrees higher than the perfect 238. The boiling syrup (obviously no kids near while this was going on…) when added to the mixing bowl, definitely sparked a reaction with the gelatin. Just not the one I envisioned.

We all agreed that it was not looking promising, but we just had to optimistically turn on the mixer. The beaters didn’t budge. I’m convinced I nearly broke the mixer. The hard “candy” confection we had created in 9 seconds would not let go of any surface. I actually sliced my finger trying to get it off of the spatula.

I could not let the Easter attempt go down in this fashion. After a little first aid, we prepped again. The ingredients are cheap and simple really. Sugar, water, gelatin, sugar, vanilla extract and sand.  Both kids seemed in disbelief that we’d try it again after failing so miserably. On the second attempt, we got the timing and temps right (always use a candy thermometer). Success! The syrup reached the right temp at the right time, along with a little monitoring of the temp control on the burner.  The mixer spent 10 whole minutes transforming the clear liquid to white fluffy peaks – just like Martha said it would. Scientific exploration at its best.

The King Declares Marshmallows to be Dangerously High in Sugar Content

We spread it out in our pan and sprinkled with that sugar in three even sections and let it set for an hour. Chef Incredible, my son, poked it quite a bit – testing…. Finally the kids were ready to take the sugar cookie cut-outs to the pan of spongy marshmallows.  The critters separated nicely. Regrettably, we rolled the edges in more of that sand.  The result: over-sugared bunnies, eggs, butterflies and tulips. In hindsight, the marshmallows alone would have tasted yummy.

I’m sure Martha hosted several kids’ focus groups for all the treats in April 2011 issue. I would have to think the sugar in these hyped them up a bit? Maybe the parents settled on this observation:  If you want eye-appealing decor to last until Easter and you don’t actually want to be tempted to eat your Easter treats, make these.

Keeping the kids occupied while you’re deep into Christmas craziness is a challenge. Throwing in a playdate with friends doubles the fun. I used to think the kids would keep themselves happily entertained, each with one friend over. However, I learned long ago that you need to plan more activities than you’d expect for these occasions. You would hate to think the kids go home and tell their parents that “all she did was work on the computer” or that they were bored the whole time.

To plan our first winter break playdate we asked, what’s more entertaining for kids in the kitchen than jello? You know the jello jingle about watching it wiggle and seeing it jiggle. Our version is the Knox Blox. It’s like a mini science experiment to make these tried and true kid-pleasing treats. 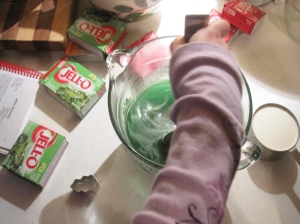 Mixing of the Blox

Step one: choose your flavor (there are 20!) and color. For us it had to be cherry red and lime green for Christmas. Buy 3 3 oz packages of jello (don’t use the sugar free), one box of knox gelatin (each box has 4 envelopes) and 1 cup of heavy whipping cream for each color you plan to make. We had 2 teams – the boys were the reddies (cherry knox blox) and the girls were the greenies (lime knox blox). This meant that all 4 kids happily took turns making them.

Step two: Mix the 3 packages of jello and knox together. Boil 3 cups of water and add it to the mix. Stir until all the gelatin dissolves.  The kids love seeing the dull dry mix go bright with color when water is added.

Step three:  Add the 1 cup of cream and continue to stir. 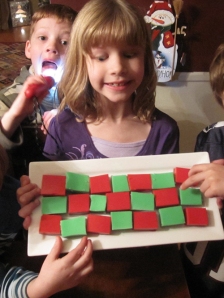 Step four: Pour the mix into a 9 x 12 pan. Place in the fridge for 1.5 hours. If you’re a kid, keep opening the refrigerator door every 5 minutes or so during this phase to check the wiggle factor. It needs to be set before cutting.

Step five: By the end of the playdate, the blox are set. The 2 teams take theirs out and hover over them waiting to pounce as a cut them. We also have some small cookie cutters we’ve used in the past, but today we’re just going for squares due to timing. We cut and arrange them on a fancy plate for them to bring out for Christmas Eve as their contribution and send some home with their friends to share the fun.

Step six: fold and eat. Scientifically, these blox are fascinating to kids. Since they’ve separated while chilling – the cream rises to the top creating a blox that is equally divided into 2 parts of creamy jello and pure jello. Even more interesting is what happens when you fold them. They resist at first, but then form a neat even line in the center of the blox when folded.

I’ve witnessed holiday jello gone wrong with fruits, vegetables, nuts and even olives in the mix. Knox Blox are jello at its best in my opinion. I’ve been making them with my mom since nursery school and have yet to tire of them or find the recipe by this name on the official JELL-O web site. Try them out with your kids and remember its cool and fruity JELL-O brand gelatin that makes the fun.