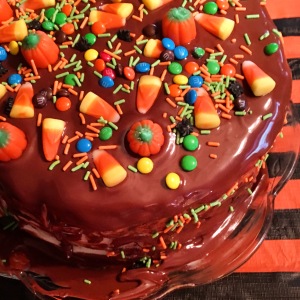 Halloween crept up on us this year. Last year we were scheming and sewing a month in advance (Queen of Hearts for a Day). This year’s Halloween prep was more spontaneous. It came together in one evening – Thursday the 27th – for a Halloween after school happy hour of sorts we planned to host Friday the 28th.

Calvin, my 11 year-old son, out of football and basketball for two weeks due to an injury, clearly sought another outlet for all of his excess energy. He channeled it into last-minute party planning inspired by Yummly, a place to search, archive and share sourced recipes from a whole host of top recipe sites like Delicious Table and Six Sisters’ Stuff.

After perusing Yummly for a half-hour, he saved 12 recipes into a folder we created in the Yummly app we titled Halloween ’16. I talked him down to seven recipes (after all, we hadn’t even invited anyone to the party that was to happen right after school on Friday). He made a spreadsheet and I quickly went through the ingredient list for each recipe. With our shopping list set, we were off to Target by 6:30p.m. 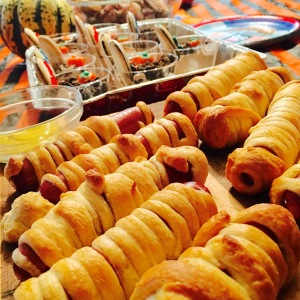 Calvin would have stayed up into the wee hours if I hadn’t set a firm stop time of 10:00p.m. (in reality it was more like 10:30). He started with the Spider Oreos — pulling the Golden Oreo Double Stuffed cookies apart, placing the pretzel stick legs on the open-faced bottom of the cookie, adding some additional melted frosting (cream cheese) or what I like to call “baking glue,” securing the top and adding the mini M&M eyes.

Then we tackled the cake. Wow, 21 ingredients and way more elaborate than I anticipated. No going back now — this would be the main attraction. We mixed so much that my average mixer was fully maxed with enough batter to fill three 8″ rounds (a mixer the next size up is going on my Christmas list). While the cakes baked, we moved on to the Halloween Chex Mix, a thankfully simple recipe. Cal melted white chocolate chips in the microwave, measured 5 ingredients, mixed them up and placed on a cookie sheet to harden.

By this time it was already 10:15p.m. Cal signed off for bed, but not before reviewing the baking plan with me first: So you’ll finish the pudding cups and mummy dogs tonight? I confirmed that was the plan.

I was on my own. With a clean mixer ready for round two, I mixed the Halloween cake frosting including orange juice and sifted powdered sugar (of which I had exactly 4 cups, just as the recipe called for). This went into the fridge for the early morning frosting step after cakes had sufficiently cooled.

Moving onto to the pudding cups, I mixed the chocolate instant pudding (dry mix and 2 c milk) and let it set while I took on the challenge of crushing orange frosting filled Oreo Double Stuffs. They do not crush well. I came back to the pudding mixture that set within 6 minutes and folded in the Cool Whip. The pudding mix then went into the clear small cups and the Oreo mix, painstakingly recrushed, comprised the next layer (regular Oreo crushing, much easier). The R. I. P. tombstone detailing and pumpkin candy adds would have to wait for the next day.

The cakes came out of the oven at 11:17p.m. and clean up began. I ended with a clearing of our dining room table and setting of the $3 Target orange and black striped tablecloth, spider web plates and napkins by midnight.

The next morning, Calvin and I were up a bit earlier than the ushe, frosting the cake. After softening the frosting made the night before in the microwave, I added the cakes layer by layer, spread the frosting and returned it to the fridge to set. We brought out serving platters and set up the treats we could — Spider Oreos and Halloween Chex Mix. He was then off to school and I off to work.

Of the handful of friends we invited Thursday late eve, three were able to attend. They were planning to come home on the bus so before Calvin left for school, he set some high standards for what I was to achieve during the day. I cautioned that I most likely wouldn’t be home, nor have the time. As it turned out, I arrived home 30 seconds before they did. We rolled with it. 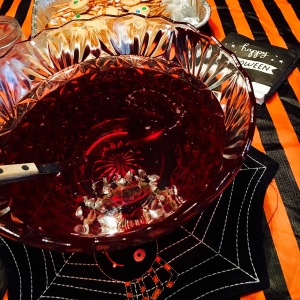 The boys grabbed one of the snacks and disappeared for awhile. I finished the chocolate ganache frosting for the cake and set in all of the goodies, then it went back into the fridge to set. I then tackled the R.I.P. tombstones while Calvin popped in to make the Haunted Halloween Witches Brew Party Punch (3 ingredients — easy!). Next up, the mummy dogs. My 13 year-old, Ava, stepped in to help with the wraps and into the oven they went.

By 5:00p.m. Calvin’s last friend had arrived, so they all came to the table in a quick flash to sample all but the cake — that would come later. I headed out around 5:30 for an event and left my husband in charge. They were really quite an easy bunch. When I arrived home at 8:30p.m., all but one boy had left and remnants of cake enjoyed were scattered about the table. I cleaned up and enjoyed a piece of cake and a tall glass of milk, gathering energy to think about Halloween Phase II: costumes!

After all of the guests had left, Calvin and I recapped the eats. He thanked me many times during the process and after for taking the time and making the effort. It was fun to reconnect with him in the kitchen (see also #KidsintheKitchen – a hashtag to follow some of our ventures, on Instagram via @jengilhoi). We get into a rhythm and I appreciate and welcome his creativity as another collaborator to make baking and party planning fun. I’m seeing chef in his future…. A mom can dream.

— Here’s to more Halloween fun in years to come. Happy Halloween everyone!

One Response to “Halloween Happy Hour”