I’m definitely the painter in the relationship. When my 8-year-old son and I embarked on a project to upgrade his room recently, it soon became clear to me that he was the big idea man and I was the worker bee.

By the time I caved and we redid his room, he’d been pitching me ideas for over a year. StarWars, Legos, football and more. He definitely knows how to plant a seed. A few weeks ago, as his birthday was closing in, I recalled a talk with a friend about the most fun birthday surprise they ever gave their daughter : a room re-do. They sent her away and teamed up as a family for an intense day to give her a new room. It got me thinking, birthday present = room rehaul.

Then, about a week ago, about two-thirds of his toys were in the hall after a cleaning and organizing spree. “Mom, I’m done with this stuff.” Wow — no attachments to this stuff, really? Good for him. Again I wondered how I could support this new leaf he was turning over. As we hung out in his room, he pointed out what he called “baby barf green” trim and a babyish rug. I considered that. His room painted 10 years prior to accommodate our unknown firstborn, was mainly blue with green trim. His sister arrived first, so I decked it out in pink accents. When Calvin arrived on the scene two years later, she moved out. I kept most of her stuff in the room (including the rug) and swapped out pink for navy. 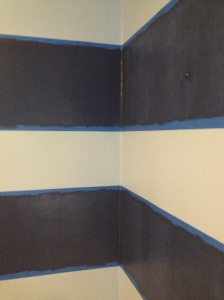 Yes, I agreed, the rug was in pretty tough shape. A few moments later I found the perfect rug online at PotteryBarn Teen (PBT) on sale plus another 15% online place your order by end of day discount and decided the 5×8 would work even though the previous one was an 8×10. Calvin gave it a thumbs up too. Then it all fell into place.

With the rug and its colors as inspiration, we headed to Home Depot for paint. I super-decisively narrowed in on two shades of Martha Stewart Living blue. We brought paint home with us on Sunday and I started the scraping process. Normally, I would just do a paint over, however, our original version included some texture we threw into the mix. That needed to come off.

Paint dust. Calvin scraped for awhile too, but bowed out because of this substance. After two intense hours of scrapping the texture off, I was ready to vacuum to the wall/floor edges to inhale the dust. Then I laid out newspaper as floor protector from paint specs, consolidated the remaining room furniture and threw a drop cloth over it. Then I taped everything off with my 3M blue – ceiling, window trim, wall trim. I removed all the hanging items – hook racks, shelves and name letters. Very time consuming.

After six hours of prep, I was ready to bring out the roller. But not yet. I did the trim and edging first for each wall, then finally following up with the big roller. I did two layers of this. Calvin came in a surveyed my work. Sure is taking you awhile. This looks like the same blue it was. I don’t get it. It’s not any different. I insisted it was way lighter. However, doubts began to nag at me. I pulled out the sample color cards when the job was complete and sure enough, instead of giving the paintmaker the Heavenly Blue, I gave him the Stratosphere. The same paint we choose ten years prior. Seriously! I could not sleep that night.

Morning brought clarity. I liked Stratosphere. We still had our navy stripes to add (Azurite, technically) and I would do one wall all in navy. It was a plan. Calvin pressed on, how much longer? Will this mess be cleaned up by my birthday (2 days later)? Not long now I assured him.

I was motivated to get this done for many reasons – his stuff cluttering the hallway, the frames, etc for painting stretched across the dining table…. and his birthday coming up. On day two I taped out the two stripes (71.25 divided by 5 = 14.25) that would get a navy coat. I used my level religiously throughout – worked like a charm. I took the mini-roller and breezed through one coat before bedtime.

On day three, the stripes got a second coat and I moved on to the two-coat work for the navy wall. Calvin made a case to apply Stratosphere chevron to it, but I backed him down. Instead we focused on an accent color choice for frames and shelving. Yellow it would be. I stuffed the rolled rug into the car, ran into HomeDepot for color cards, back out to the car to match the rug and back in to get the right paint – Sahara Shade. Before bedtime, I applied a layer to each item.

Day four. Move in day. Another coat of yellow, some navy for the vent. Wait…. more nails, more screws, more putty (for the C-A-L-V-I-N wall art project) and progress. I washed curtains and ironed them (had I ever done that?). Yes, super fresh! Calvin moved his books back in, adhered his new dry-erase map and found a home for his new guitar. We reused frames, shelving and more. Proceeds from whatever we might sell of the PotteryBarnKids MVP bedding will go to new bedding/decor. He’s thinking football.

There’s definitely a more grown-up feel to my just-turned 8-year-old’s room (see the Vine video at jengilhoi). He’s pleased with it. I hope so because it’s only a 1 (at most 2) time occurrence to flip your room from birth to 18. Most parents I polled also agreed – one and done. Timing was just right for this change and Ava, my 10-year-old, has handled it beautifully. We were on track to redo her room in December (see the blog post), but discovered that her PB rug was in good condition, we couldn’t agree on color selections (no your walls cannot be black) and the top colors she wanted to lose were hot pink and baby pink which was everywhere, so it would be more expensive to replace. She’s waiting til age 12 she says. Thank goodness. That will buy me some time to rest up and save up!

Celebrating a decade of existence is no small matter. Each year, we start contemplating themes early in May for my daughter’s early June birthday. There are always many variables — how many to invite, what to do, what to eat and when to have it.  This year, I suggested a few options – 1) invite everyone and keep it to a three-hour party at our house or 2) invite up to three girls and call it a sleepover.

Ava, my recently turned 10-year-old, first tried to compromise. She wanted to invite everyone for a few hours, then have a few stay overnight. I was not taking alternate options. After a few days of deliberation, she selected the slumber party/sleepover. We hadn’t ventured this route yet, but I figured it was time. The girls were mature enough to handle it (was I ready?).

Because the invite list was small, I did a quick text poll to the girls’ moms to find out which of two dates worked best. With that nailed down in less than 12 hours, we had a date, our guests confirmed and a general idea of activities.  We did a quick evite (as opposed to elaborate handmade invites in years prior) with a tentative schedule: 2:00p.m. on a Friday until 9:00a.m. on a Saturday; and activities: roller skating, pizza, pedis and movie.

The kids’ birthday parties each year always seem like quite a production. Maybe it’s because we never throw any adult parties. I do a quick run-through of parties past and notes to self from previous years – outsource food, simplify decor, clean and plan like crazy. Since food is snack stuff and pizza at a restaurant is easy, I opt to make a four-layer red velvet cake, Ava’s choice. For whatever reason, I always make the cake. This one was towering. The slimmest silver of it was plenty.

Sock-buns at the Roller Garden

For decor, I hit Litin Paper no earlier than 10:45a.m. the day of the party for decor and balloons. I’m not stressed in the least. Odd. Then home by 12:45 to pull off a major house overhaul, decorate and head to school by 2:00 to pick up Ava and two of her guests.  She is really surprised by the transformation at home and seems delighted by it. I think she thought there was no way I could pull it off given the state of the house when she left for school.

We hang out til we can drop off her younger brother at class. Then we are on our way to Aunt Katie’s for make-up and hair at Ava’s request. We arrive at 4:15 and our fourth guest, Sophie, meets us there. The four girls all get a different look hair and make-up wise – – the common thread: sock-buns and glitter eyeshadow. We’re out the door by 5:30 for the St. Louis Park Roller Garden.

We arrive, pay admission and rental ($8 per girl) and take the floor. I swear at least 15 birthday parties are happening – – it is kids night from 4-8 after all. We all skate, including me, and snack on pretzels and soda. One boy who is kind of a terror on the rink, gets a stern talking to from Sophie. We unlace around 8:00 and head to Fireside Pizza.

I like this neighborhood joint (we went there for my son’s 6th birthday), but I forget that service is slow. About 50 minutes after we order, our pizzas and pastas arrive. I do hear some really good stories in the meantime — everyone has a story about the ocean, there’s some crude/rude humor, but no boy talk.  Maybe that’s for later?

I thoroughly enjoy the conversation. We’re home by 9:45, but too full for cake just yet.  So it’s on to presents then pedicures. Thank god there are only four — they each get a footbath, massage and polish. They all choose differently — fuchsia, candy apple red, purple and smurfy blue. They’re kicking back and watching the movie Hook during pedi time.

11:45p.m. rolls around and we’re ready for cake. Super late I know, but not letting this wait til the a.m. Calvin is still up to witness this. And so the song goes, the candles are blown out, the cake is cut, and the vanilla and strawberry ice cream scooped.  NOW, can it be time for bed?

Yes, it’s close for sure. Back to their sleeping quarters and time for some girl talk. I turn out the lights and fall exhausted into bed. The next morning comes quickly and I’m up with coffee. Enjoying 15 minutes before it’s time for a waffle breakfast. The girls seem a bit tired (12:45a.m. = reported bedtime), but in good spirits nonetheless. No sooner than they finish up their breakfast and pack up their stuff do their parents arrive for pick-up.

We take some photos and call it a party. We wave goodbye to our guests and take a moment to recap. Then it’s off to more adventures for the day, knowing we have the weekend to recover.